Professional cyclists are clamouring for a position on Team Vitesse's stacked roster. Not only is Alberto begging to be included but now the whining Aussie has expressed exasperation and frustration (what else) with Team Vitesse. The choice of the final selection for the 2010 season rests in the hands of Johan the Omniscient. Rumours abound that a "ride off" will take place at Johan's palatial grounds surrounding his Lake Como villa. To secure that coveted final spot, potential Vitesse members will have to cut as much grass as possible in a six hour window aboard the Happy Lucky 88 Manufactory mowped pictured below. 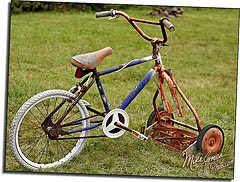 In case of a tie, whoever has the most tied stooks in the time allotted will be allowed to carry refreshment bottles for the likes of LT, LB, K2nees, h20, and Night Train. Both Alberto and Cadel are reportedly in training for the great mow off.
Posted by bowtie bob at 2.11.09