Night Train, one of the stalwart heroines of Team Vitesse's international complexion, has suffered a catastrophic mishap. It is difficult to sift the truth from the feathers on this breaking story, but it appears that Canada geese, acting in concert, attempted to commandeer her bicycle. A battle royale ensued during which Night Train sustained a broken thumb and a nasty contusion to her thigh. The geese attacked in a "V" formation and were barely beaten off with a pump. Night Train managed to keep her bike and the geese were eventually disbursed using water cannon and tear gas.
The planned training in the Orkneys has been cancelled. On a positive note, NT can now adopt the freshness approach to training so successfully employed by Lampo Bianco.
Posted by bowtie bob at 28.6.10 No comments:

Labels: Night Train takes one on the Thumb

They say that god is in the details. If this is the case, Lampo Bianco's Freshness campaign has evolved into a life style choice that most of us can only dream of. Devoting all his resources to the details of sustaining a fresh approach to the Tour, LB has buried himself in the minutiae of freshness. He will shave his gams on the day of the prologue in Rotterdam. He will change his bald tyres for fresh rubber on the same day. He will wash his kit the morning of the first stage to Bruxelles. He has successfully ignored the travails of training and will instead use his powerful Within Power to roll to victory. It is in this way that he perpetuates his place on the inertia wagon, lightly clinging to the hand rails of inaction. Save your applause so that it will be fresh on the day Lampo Bianco shoulders the yellow jersey.
Posted by bowtie bob at 28.6.10 No comments:

Labels: Envelope yourself in plastic

This is What I am Talking About

I would like _ 1 MILLION _ bag(s) in whatever colour HL88 decides to make the bag(s) from and expect to receive it/them whenever the Manufactory finishes it/them.

Johan has a Brand New Bag

Happy Lucky 88 Manufactory has decided to extend its prodigious product line to include sewn cycling satchels. Management has noticed that a growing subculture of hipsters in need of shoulder bags is waiting impatiently for the next trend. HL88 has always prided itself on being ahead of the wave of any products associated with cycling. In keeping with one of their mission statements, "Why make it out of a light material when you can make it out of plywood?", the manufactory has sourced a suitable fabric for this important project. Far more fascinating than plycra, the new "soft" plywood products will be available soon. 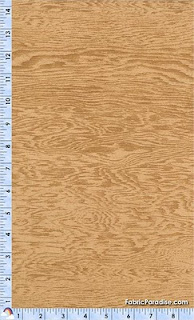 The next time you spot Johan at the black jack tables, compliment him on his brand new Plywood bag.
Posted by bowtie bob at 21.6.10 No comments:

Labels: Plywood for all

It has come to the attention of Johan and by extension, cycling cosmonaut, that Lampo mounted a stationary bike for a few minutes yesterday. This is in contravention of the Team Vitesse rules and regulations which categorically state in Section 14, Subsection (a), Paragraph (ii) that "Whatever Johan wants, Johan gets."
Johan promised swift disciplinary action. "He must pay with more enforced inactivity. He has set his freshness quotient back 2 weeks!" blathered Johan.
Lampo's sanguine response seemed to have quelled the wrath of Johan. "I promise to hover in the lotus position 6 inches above my desk chair just by practicing my WITHIN POWER. Apologies to Johan for falling off the inertia wagon. Maybe I can fix it with a night of drinking, gambling, and sleeping in a hot tube." purred Lampo.
Let us hope that this puts Lampo back in an orbit of inertia before the Tour.
Posted by bowtie bob at 17.6.10 No comments:

Labels: Into the hot tube

Exclusive to cycling cosmonaut, this foto shows the full extent to which Lampo Bianco has avoided training. Bicycle seats have always been a fertile place for germinating seeds but the new HL88 seat accurately measures the amount of time off the bike. Lampo has taken Johan's "freshness" training regime to heart. Careful measurement of blade length multiplied by hours of sunlight divided by average rainfall indicates that Lampo's bike has been idle for 5 uninterrupted weeks. A new level of languorous freshitude heretofore unheard of by professional cyclists has been achieved by Lampo. It is no wonder that Team Vitesse is a favourite at the Tour de France in Rotterdam on July 3. 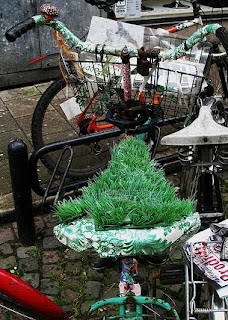 The long awaited announcement of teams invited to the Vuelta came and went -- without the inclusion of Team Vitesse. Johan immediately flew into a rage, damaging his vocal cords in the process. He remains speechless but managed to scribble a few notes on a casino napkin. "The Vuelta organizers have ensured they will never be invited to any Team Vitesse functions" the barely legible scrawl said. This is surely a devastating hardship what with Team barbeques, bingos and jumble sales all in the planning stages this season.
Team Update:
It appears that Lampo Bianco has sustained hurt feelings at not being included in the Dodecahedron Ply-nology treatments. Johan is currently testing the ply-nology on himself to ensure that it will provide actual positive results to already healthy cycling specimens. Johan has found renewed success at the black jack tables thanks to the Dodecahedron. Lampo, designated team leader, is champing at the bit to begin his treatments in advance of the Tour. "My state of relaxed fitness will peak for the Pyrenees with that 12 sided technology" cooed Lampo.
Night Train is planning a training run through the rain, wind and fog of the Orkney Islands in advance of the Tour. The idea is to become inured to the elements, enjoy some bronze age ruins and not get lost in the process.
Meanwhile, Le Triple continues to show promise actually riding on the European continent in actual races. Johan cannot believe the level of commitment shown by LT. "I love this guy... which one is he? Did we sign him?".
Posted by bowtie bob at 15.6.10 No comments:

Labels: Peak for the Pyrenees

Happy Lucky 88 Manufactory has responded to the latest rash of injuries suffered by Team Vitesse with a new product of unprecedented muscle potential. The newly patented Dodecahedron Ply-nology promotes healing during heavy exertion under race conditions. The talented polyhedron with its 12 flat faces has been used by h20 on an experimental basis during his miraculous comeback from cycling oblivion. Soon Dr. K2 will benefit from the mysterious scientifically proven coercimetric and epidiascopic properties. 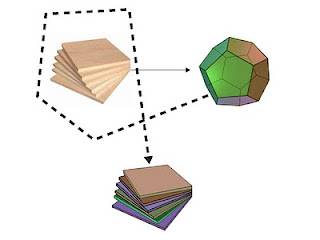 Currently the Dodecahedron Ply-nology is available only to Team Vitesse. HL88 management projects a late July 2018 release of this "Johan Approved" product to unprofessional consumers. Have no doubts..."Johan Approved" products have achieved the highest certification possible and are guaranteed to be wonderful.
Posted by bowtie bob at 8.6.10 No comments:

Labels: Get your Dodecahedron technology Here

In an unfathomable turn of events, Dr. K2 has suffered unknown internal injuries at the hands of a thoughtless motorist. It seems that the good doctor was travelling along a busy street when the perpetrator (here after known as the perp) opened her car door. K2 was able to move his body out of the way of the door but his brake lever and actual brake struck the offensive object. He somersaulted over his handlebars. Being a dedicated company man through and through he continued on his way to the Happy Lucky 88 Manufactory retail outlet.
Dr. K2 moaned, "This is worse than being beaten by Johan. I need to draw on my WITHIN POWER for a speedy recovery".
h2o was sympathetic as he continues his slow progress back from oblivion, "The doctor needs to follow Johan's strict recovery guidelines. He must ride longer and harder to recover more quickly."
The future of Team Vitesse in the Tour de France now rests on the shoulders of Lampo Bianco. He is the only remaining uninjured rider on the team. This is due exclusively to the fact that he does no training whatsoever, preferring to arrive "fresh" on July 3 at the start line in Rotterdam.
Posted by bowtie bob at 7.6.10 No comments:

Labels: Fresh Team out of contention

Yesterday, h20 received the go-ahead to begin light riding. Extensive consultation between doctors, Saint Karl (the Patron Saint of Plywood), and Johan the Healer, has allowed h20 began the long road to full cycling fitness today. Gingerly pedaling with a heightened sense of mortality, h20 feathered his blue single speed into its usual parking stall below the Happy Lucky 88 Manufactory treasury department. A smattering of comments from fellow Team Vitesse members show the depth of their respect and concern for one of the founding fathers of this fabled team. Cycling Cosmonaut managed to interview team members during an intense media scrum after a session of sprint training in Death Valley.
Lampo Bianco wept as he said, "Coming back from injury is one of the bravest undertakings any cyclist can undertake. I was forced to come back from a trifling ankle injury and I know the sacrifices one must make. h2o's pluck in the face of adversity is legendary. He will succeed and the heavy drop will be back."
Dr. K2 was filled with foreboding stating, "h2o is going to come back hungrier than ever for downhill sprint points. I must get used to the idea of being constantly shelled from an h2o lead peleton. On the bright side the incessant media pressure will be focused on him allowing me to concentrate on good sensations."
Johan's surly comments were edited for family reading: "This ******* excuse of being lame has run its course. My management of this ******** Team is the best thing that could happen to cycling." Thank you Johan.
h2o perhaps put it best when he muttered, "Come backs are difficult. Witness Wiley Coyote after being squished by an anvil. Johan is a hard taskmaster and I will strive to be better." h2o went on intoning, "I owe my recovery to sleeping in the Euphoric Fountain of Youth Booth. Each night the plywood was installed over the tub and PE5GW dutifully sealed the plywood/porcelain interface with duck tape. Air was evacuated from the booth and the healing process began. The struggle for oxygen was character building. Kudos for the great engineering from HL88!".
Posted by bowtie bob at 4.6.10 No comments: