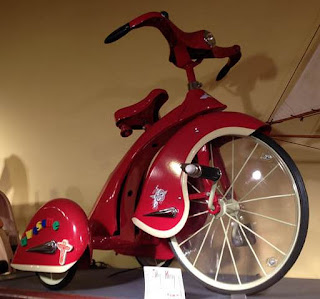 Cycling cosmonaut returned from a trip to check out the cycling culture of the cowboy hat metropolis to the south. This tricycle caught my eye, immediately transporting me back to the timeless cartoon, "Triplettes de Belleville". 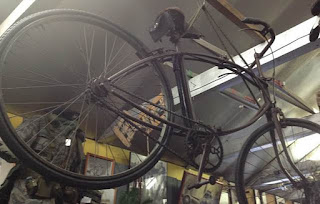 Meanwhile, this "vintage" military bicycle hung from the rafters with care in a local army surplus. Presumably it was designed with high swoop factor on top and down tubes to outrun the enemy bombing raids.
Posted by bowtie bob at 24.11.11 No comments:

The Manufactory is once again firing up its litigation team to sue the nation of Denmark for copyright violation. Pictured below is the offending reproduction in the form of a plywoodium blanket. "This is an outage" raged Johan between shots of port. Bjarne Riis, manager of Team Saxo Team Bank, is suspected of copying the ever popular, people pleasing, patented plywood pattern. 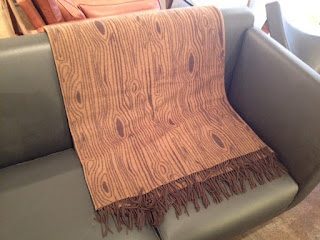 Labels: Danes on the hook

Memory from the "Olden Days"

I spotted this "vintage" Schwinn bike on the interweb. I was immediately transported back to my junior and high school days in Lethbridge Alberta about 40 years ago. My dad had a black steed like this one. When I was big enough I ditched my smaller Schwinn with the banana seat and ape hangers and rode this model. It was certainly faster but a bit dangerous on the "big shale". The big shale was series of huge swoops and steep hills frequented by motorcycles. 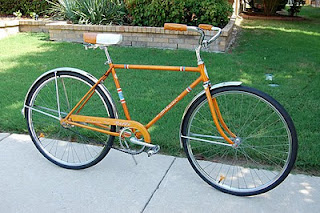 I have great memories of flying down smooth, almost vertical pitches and slamming on the coaster brakes just before the river's edge.
Posted by bowtie bob at 14.11.11 4 comments:

Labels: I don/t have one of these

It has been posited that the heaviest cyclist is the Pachyderm. This sliding measurement comes to the intertube from the site, SuperClydesdale. The Pachyderm is the cyclist weighing in excess of 220 pounds. The pachyderm is constantly faced with the limits of technology. Whether it is the tensile strength of spandex stretched to the point of flames or the torsional strength of carbon wheels, the big cyclist is a force in and of nature. This fact was visualized in 1894 by some lardass named Byron. 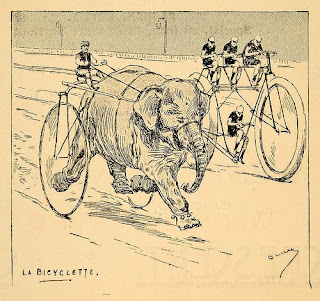 Happy Lucky 88 Manufactory has commissioned the Unknown Poet (UP) to write and produce a rap song entitled, "Pimpin' Mah Ride". In the style of the genre, UP will be rhyming such words as belligerent, Heavy Drop, conflagration, wheel sucking, CAFIB, plywoodium and other terms ubiquitous to HL88's mission statement. Core Team Vitesse members are excited to get this motivational music into their Walkmans. Lampo Bianco's response summed up the team's anticipation drawling, "This rap thing will be a nice change from the steady diet of Hank Williams Jr. and Neil Diamond we have been listening to for the last 3 years."
The Unknown Poet has her work cut out for her satisfying Johan and the rest of the team. The song is scheduled to "drop" in time for Christmas.
Posted by bowtie bob at 4.11.11 2 comments: