On July 22, 2022 the mobile Cosmodrome was pressed into action for the third running of The Range, a 128km gravel race event.  The team, Catherine, George and Bob drove down to Claresholm, AB to camp in the Centennial Campground. Handily, this happened to be the Start/Finish area for the race.  Saturday was busy at the parking lot as many drivers of Audis. Mercedes, BMWs and lesser vehicular brands, laden with fresh gravel bike equipment, prepared for the 0900 hrs start. 230 riders took part in 2 distances, 80 kms and the full 128 test. 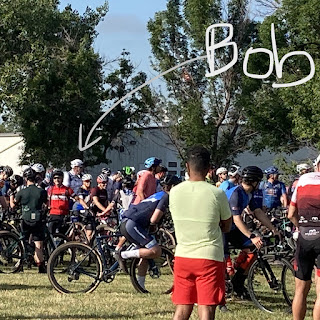 the start
People quickly settled into their paces over the first 25 kms. I stopped for a natural break and a tree foto and was passed by at least 25 people.  I knew I needed ride consevatively (slowly) to maintain my energy for the long road to come.  At the suggestion of marathon and ultra-man contestants, I wore a camelback (2 liter water bladder on my back) as well as carried 1.5 litres on the bike.  There was a water/feed station every 40 kms.  I certainly used all the water over the middle 40 kms.  Recent rains had made the grass lush and long.  The temperature was not temperate. It was freaking hot. 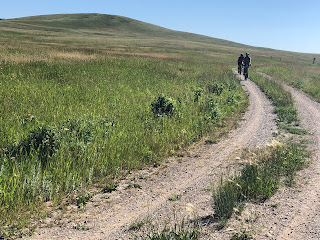 dry section on the approach to the hills 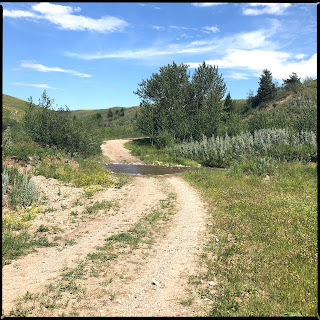 one of 4 water crossings
There was a huge climb of 5 kms at 8 % which I and other back markers were forced to walk.  I felt I could have ridden some of it but did not want to "burn all my matches" before the final 40kms.  That climb probably added at least 1.25 hours to my time. Walking speed allowed hoards of horse flies to feast on exposed skin. They did not succeed taking any chunks out of me but not for lack of trying.
The course followed a ridge line with exits to East or West Sharples Creek road. Signs directed us to cross private land with breathtaking views and a crazy steep road climb and descent.  The forest and frequent views of the valleys were stunning from what I could see through my perspiration infused glasses. 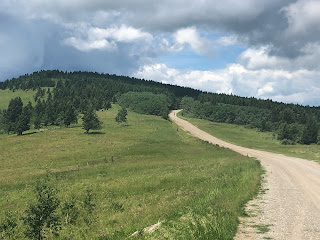 ridge line road
looking northwest
I husbanded my resources for the final push home.  I continued to ride slowly and steadily, narrowly beating the time cut by 3 minutes.  Cyclists were required to cover 80 kms in 5 hours.  If not, they/them are pulled from the race and they/them forgo the last feed station.  I wasn't paying attention to the time so I was surprised it was such a close run thing.  I wanted to take more snaps but I felt that, although I was not running last, I was awfully close to being the last rider on course.  A red fox and a mountain blue bird showed themselves on a steep downhill section.  The wild flowers were blooming but momentum overrode fotography. 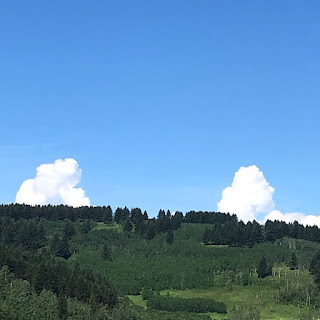 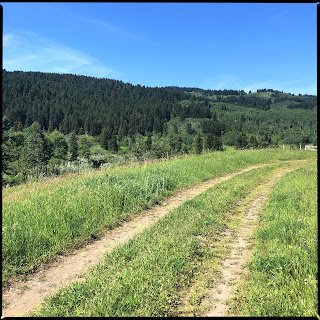 the route cut across private land
In hindsight, I may have stopped too often. I am hopeful that sentiment will be proven wrong when I see more fotographic results.  I used my fone and a small MINOX 35mm camera.  The analog fotos won't be available for a while.  Over the last 3o kms, across the rolling, dry and windy prairie, I felt I had some reserves left to take the fight all the way home.  In fact, the most heartening part of the day was passing 4 cyclists on those rolling roads.  3 of the people I passed were obviously cooked. They had dead eyes and uttered one syllable responses to my "Howsit going?".  I gave one guy an energy bar. Perhaps they had not hydrated enough or not eaten sufficiently.  I knew that look--I've had it and it ain't fun.  The last guy I passed was faster on the smooth surfaces and bits of tarmac, but my power on gravel was superior in the end.  I passed and dropped him like a pair of dirty underpants.  That moment in itself was enough to justify the long walk up the 5 km hill. 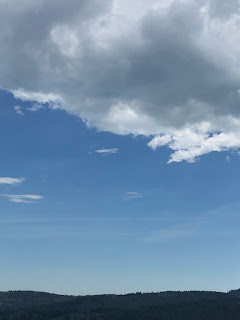 this cloud did not hang around for long
I was surprised to arrive in 7 hours and 52 minutes (3.5 hours after the winner).  My Garmin device read only 6 hours. I thought I had performed kind of fantastic speed until I realized that the Garmin records motion only when actually cycling.  Walking speeds are not recorded.   I received a hero's welcome from Catherine and George.  I was a bit cross eyed, hungry and had endured some cramping in the last 10 kms.  I am proud I finished all 128 gravel kms of The Range, enjoying some of the most beautiful scenery in Alberta along the way. 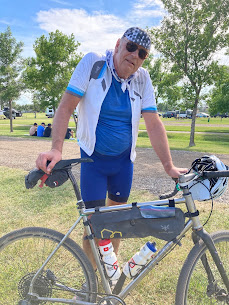 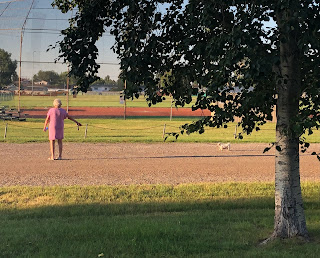