Happy Lucky 88 Manufactory wishes to clarify the process being applied to plywood when included in the sports drink, Exhalted Performance Output.

Management apologizes for any confusion this may have caused.
Posted by bowtie bob at 28.2.09 No comments:

EPO - the last word in Performance

Once again, Happy Lucky 88 Manufactory in conjunction with Team Vitesse, is pleased to announce a performance boost for cyclists at all levels. The next generation of performance supplements, EXHALTED PERFORMANCE OUTPUT, also known by its acronym EPO, is set to revolutionize your energy and power productivity. Comprising 14 active ingredients including dengue berries and synthetic rhinoceros horn, the power to mass ratio equivalency is guaranteed to improve any cyclist's performance. The new tricubic downsampling process exclusive to Happy Lucky 88 means that plywood's life-giving essence is inherent in EVERY bottle.

The management of Happy Lucky 88 believes strongly in this product and has developed monikers for these miraculous flavoured energy liquids. Red EPO is available under the brand name, Fuentes Fizz. It targets riders who desire a sustained performance window. Cyclists looking for immediate results on mountain stages will find yellow EPO or Pee-Poli very satisfactory.
Posted by bowtie bob at 26.2.09 No comments:

A lot of discussion has appeared concerning the UCI's enforcement of an obscure Rule concerning Time Trial equipment. UCI code 1.3.024 states that the ratio between the length and the width of equipment cannot exceed 3:1. Nervousness swept through the peleton with potential last-minute changes necessary to the time trial machines. This rule could potentially affect the famed Prosperous Contented Obstruction Blocking, the ferring made of plywood specially designed for Team Vitesse time trials. Fortunately, Happy Lucky 88 Manufactory are blissfully unaware of the UCI rule book and were able to design the Prosperous Contented Obstruction Blocking, unfettered by any restrictions or preconceptions. Happy Lucky 88 always has the cyclists' best interests at heart. We contacted Johan at a Texas Health Spa who quipped, "Why is everything made of plywood?". Oh Johan, you are so humourous...
Posted by bowtie bob at 24.2.09 No comments: 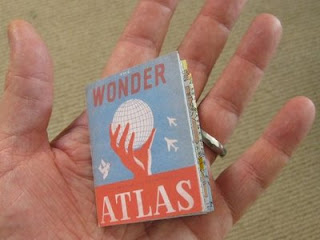 Happy Lucky 88 Manufactory is proud to introduce a companion world atlas for the biofeedback system known as the SMEVEC 88T. Advertised as being "Very Useful Depending On Your Location", the Wonder Atlas is now included with every SMEVEC system purchased. 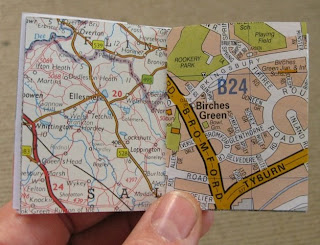 Examples of the incredible detail in page after page of the Wonder Atlas. 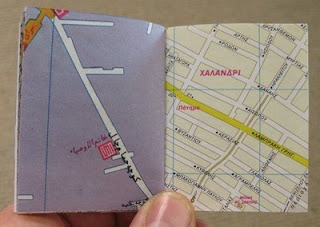 From the street in some Greek town to a road somewhere in the Arab lands, the Wonder Atlas never ceases to be amazingly useful.
If you are like me and have mused about the sea trenches in the Mediteranean while on a training ride, then the Wonder Atlas will satisfy your curiousity. 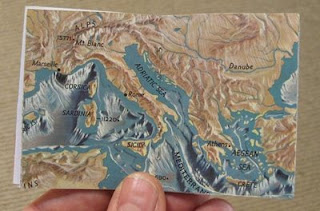 Produced by the Most Agreeable Printing Company (all rights reserved).
Posted by bowtie bob at 18.2.09 No comments:

Labels: The little Atlas with the big heart 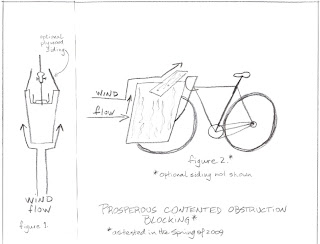 As Team Vitesse makes its slow, methodical and incremental progress around the Mediterranean panhandle, Happy Lucky 88 Manufactory has been busy improving the team's equipment. In particular, the famed Prosperous Contented Obstruction Blocking has received rigorous wind tunnel testing. The San Diego wind tunnel, where most other professional teams have been testing rider's positioning, was unavailable to our Happy Lucky 88 engineer. Instead, the testing took place in a large culvert joining 2 grazing leases in Southern Alberta. Once the cattle dung had been removed, the Prosperous Contented Obstruction Blocking was attached to a bicycle and placed in the "tunnel". Cigar smoke was blown over the ferring on a very windy day. Adjustments were made to the setup. The results prove that the Prosperous Contented Obstruction Blocking can improve all Team Vitesse time trial results. The Team has no concerns that minimum weight standards dictated by the UCI will be a problem. "Our time trial equipment is 14 times heavier than the UCI standards", boasted a Team Vitesse member.
Posted by bowtie bob at 16.2.09 No comments:

Manage Your World with SMEVEC 88T

Happy Lucky 88 Manufactory is pleased to announce an upgrade to the SMEVEC 88T, their exciting on board cycling computer. The simple modular nature of the SMEVEC system facilitates regular changes to any of the easy-to-use components. The redrawing of national borders and the emergence of new countries has made the original globe on the "Globe Positioning System" outdated. Therefore, the Manufactory has signed an exclusive agreement with the company Most Agreeable Printing Company (MAP Co.) to put the new Globe in "Globe Positioning System".
A MAP Co. spokesperson said that the new globe will be larger and have enough detail to include countries such as Chad, Argentina and even Yugoslavia! Is it any surprise that Happy Lucky 88 Manufactory is synonymous with excellence in cycling?
Posted by bowtie bob at 6.2.09 No comments:

Vitesse HQ on the Rocks

Our on-board correspondent reports that the SS Wherethehellarewe, carrying the Team Vitesse motorhome, has run aground off the coast of Phoenicia. Using ancient marine charts photocopied at the British Museum, the skipper apparently misjudged the winds and was lured onto the rocks by a siren. There was no damage to the motorhome which was thrown ashore by the violent jolt. Some of the Team's equipment shifted in the container but no serious damage was done to those resilient plywood products including the Super Absorbent Rain Cape and the SMEVEC 88T. The team is now faced with a 6,500 kilometer training ride from Phoenicia's capital, Byblos, to Northern France for the Paris-Roubaix race on April 12.
Obviously if the ship's captain had used the revolutionary SMEVEC 88T with its patented GPS (Globe Positioning System), he would have run aground in a more contemporary location.
Posted by bowtie bob at 2.2.09 No comments: