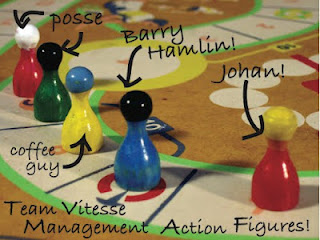 Hey Kids! Action figures of all you favourite stars of Team Vitesse are now available from Happy Lucky 88 Manufactory! Collect one or collect them all and become the envy of your friends and other people. These action figures are molded from hard to get plastic resources too numerous to mention. Perfect for race visualization while listening to live updates on your wireless! 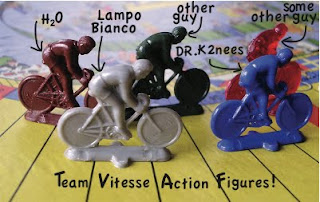 Ask the Pros - a new Feature

A new irregular feature is hereby launched on the cycling cosmonaut blog. Entitled "Ask the Pros", frequently asked questions will be fielded by Team Vitesse professionals. Today's "Ask the Pros" is the simmering issue: HOW DOES THE PRO PELETON DEAL WITH NASAL EXPECTORATION?. We went to Lampo Bianco for his groggy response, "What is nasal expectoration?" Nasal Expectoration is known indelicately among certain members of the cylcing community as the launch of SNOT ROCKETS. Lampo is of at least 2 minds on snot rockets during racing. No one can deny the powerful tactical advantage a rider has being a prodigious snot rocket launcher. Johan is an advocate of a combination of Heavy Drop and nasal expectoration in any sprint finish. Those behind the expectorator must maneuver through a virtual mine field of compromised road surfaces. Advantage - Expectorator. Lampo has also been the recipient of direct hits to the ankle from errant snot rockets. He confessed that these horrors are the main reason he shaves his legs. Courtesy dictates that a rider pull out of the peleton or drop off the back to clear his passages. However, in the rarefied tactical positioning of the professional peleton, this nasal weapon cannot be ignored or underestimated. Barry Hamlin put it best stating, "When you ride with or against Team Vitesse, you must be prepared for everything!"
Posted by bowtie bob at 25.6.12 No comments:

the embattled Johan continues to deflects USADA (United States Anti-Doofus Agency)allegations over the use of performance enhancing doofuses (doofi). Barry Hamlin will step in as interim director sportif for Team Vitesse. In the early part of his career, Mr. Hamlin became known for his successful management of a Burger Baron outlet in rural Montana. He will apply his considerable french fry knowledge to the Tour de France. "They eat fries don't they?" exclaimed the venerable industrial designer. Johan sees his absence from the cycling limelight as a temporary setback for the team. Lampo Bianco is quoted as bawling "I still believe in Johan!". Dr. K2 sounded vexed when he said, "What Will Johan Do?". h2o was more sanguine about the situation describing it as merely "a tempest in a haystack" and "an elephant under the rug".
Posted by bowtie bob at 18.6.12 No comments:

In preparation for the certain wild card invitation to the Tour de France, Team Vitesse will concentrate specifically on mountain top finishes. Simulations are set to run in which each rider will approach a virtual finish line. During the last 10 meters, the rider will practice zipping up his jersey for maximum sponsor advertising exposure. If you remember last year at the Tour, Lampo Bianco crossed the line at Verbier with his jersey flapping in the breeze. Officials at Happy Lucky 88 Manufactory were displeased at this missed advertising opportunity as Lampo crossed the line 169th on the day. Johan will address this situation from the comfort of his Lake Como home. He will record special instructions on cassette tape to be played by Team Vitesse on their Walkmans.
Posted by bowtie bob at 11.6.12 No comments:

Yesterday's 300 kilometer training ride proved quite eventful for h2o. During a particularly daring maneuver, h2o's front derailleur went pear shaped both literally and figuratively. h2o was drafting behind an 18 wheeler transport uphill on an overpass trying to beat the traffic light. During high load Heavy Drop cycle stresses, the front derailleur did not respond to his request. He ended up sprinting for glory in a 36/11 configuration which can safely be called the Lame Drop. Upon reflection, h2o has made the suggestion that PE5GW follow these epic training rides in a support vehicle and be able to provide either a replacement bike OR mechanical support while moving. It is obvious that the driver of the support car should be able to drive the car and lean out of the window to adjust or even replace a front derailleur. This is exactly What Johan Would Do if he wasn't tied up babysitting the Schleck sisters.
Posted by bowtie bob at 4.6.12 No comments: