For members of the professional peleton, mere mention of the Heavy Drop is enough to induce uncomfortable silence. For those who have been subjected to its magnificent ferocity and witnessed the shear tyre ripping acceleration, only dumbstruck awe can summarize their reaction. The Heavy Drop has been oft discussed on these pages. Little is known about what a Heavy Drop really feels like from the inside. Some imagine the "drop" to be similar to the hyper drive of the Millennium Falcon. 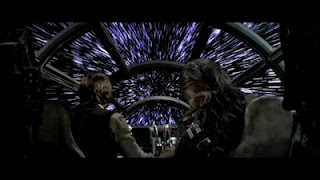 Cycling cosmonaut caught up with h2o of Team Vitesse, the inventor and foremost practitioner of the Heavy Drop. "It may appear to victims that initial burst of speed is like entering a black hole." h2o continued, "the black hole is actually where the rest of the peleton is left." Due to the random nature of these attacks, accurate velocity measurements have not been successfully recorded. It is estimated by HL88 scientists that stresses on h2o's bicycle are similar to space shuttle reentry stresses measured in multiple large units.
h2o graciously offered to fit a specially designed "camera" to record images of the first 0.5 meter of a Heavy Drop. During the first nano-second we can sense the surge beginning and what must be a nest of writhing snakes at the margin of the road. 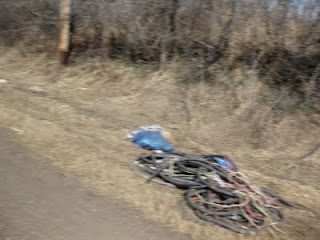 At T plus 1/100th of one second of the Heavy Drop, distorted trees flash by, camouflaging what is probably a pack of wolves in the shadows. h2o qualified this exclusive footage stating, "I had to slow my Heavy Drop launch because of the 5 kilos of camera gear strapped to my helmet. I hope this small sample gives the reader a taste of the electrifying experience inside the Heavy Drop." 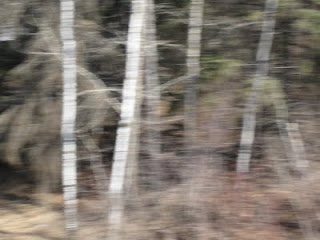 Our thanks to h2o for these exclusive images. Is it any wonder that the Heavy Drop is such a feared weapon in the Team Vitesse arsenal?
Posted by bowtie bob at 22.4.11 No comments:

Now into my fourth consecutive flat free day and feeling pretty good about it, the daily tube death ratio has fallen from 0.57 tubes per day. This is a welcome trend from the 3 for 3 mortality rate. I expect a glorious increase in tube lifespan after improving the tyres now gracing the rims of my fleet.
Posted by bowtie bob at 14.4.11 No comments:

Labels: A time for tyres

The inner tube death toll rose to 4 after a puncture today. This makes 4 flats in 5 days. Before you leap to the conclusion that the daily puncture rate is 0.8, consider this. The one day I did not ride was the day I did not suffer the indignity of a puncture.
It has been suggested that I alter my route to avoid the nail factory and the broken glass depository. These landmarks are not the problem. The vast amount of small gravel strewn willy nilly over the highways and byways of this great city must be considered the culprit. I can only assume that specially sharpened fine glass particles with powers of rubber attraction have conspired to ruin my contented commutes. 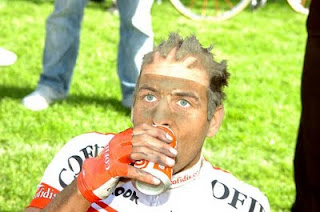 If these puncture misfortunes continue to befall me, I will begin resemble this hapless professional from Paris Roubaix.
Posted by bowtie bob at 11.4.11 1 comment:

Indeed, as advertised, 3 days of riding to work have yielded 3 flats. I am trusting that bad luck comes in 3's and this is the end of the stretch. I am single handily keeping the rubber plantations in business. 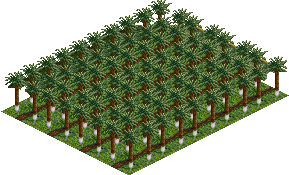 I work more hours than usual at this time of the year. Each puncture has come on my way home after a long day of number crunching. It is difficult not to take the wrath of the rubber god personally. I am afraid...very afraid. 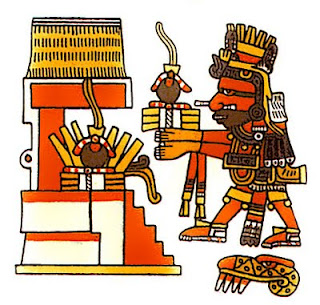 Labels: Rubber all over the road

A seemingly innocent training ride turned into an epic journey of robust proportions. h2o and Dr. Knees rode over the famed Passo di Mortirolo at the insistence of Johan. The fotos below prove that Team Vitesse still has the foolish bravado and daring do so admired by its prime sponsor, Happy Lucky 88 Manufactory.
After ascending the first 3,000 meters in little over an hour, Team Vitesse bravely continued without the vehicular assistance other more panty waist teams rely on. 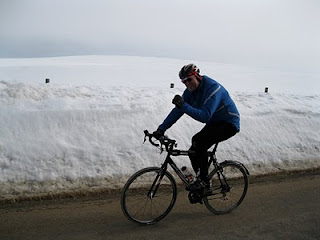 The riders found the pass "pan flat" and cannot understand what the "big deal" is about this much feared pass, used regularly in the Giro d'Italia. 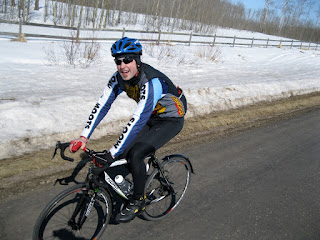 If there was one blemish in an otherwise glorious mountain outing, it was that Giovanni's Koffee Shak at the top of the pass was closed. "With vehicle support we could have ridden to Germany" lamented K2nees. 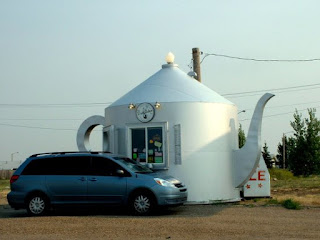 Labels: Koffee Shak a let down

This year, Johan chose to sit out the Ronde van Vlaanderen with Team Vitesse. His reasons are many but professional pundits believe it comes down to 2 reasons:
Whatever the reason, two thirds of the team went out yesterday for a clothing layering test on what has become known as the Frozen Hell of a Winter. Dr. Knees, resplendent in a riot of clashing logos and colours, rode a wonderfully clean scandium frankenbike. h2o spun the course on a cross bike named after a North American Mountain range.
A cold wind blew off the snow capped fields. Since this was the first organized Team Vitesse outing, the road rose and fell precipitously. Johan seemed pleased at the riders' progress towards domination of the cobbled classic. Dr. K2nees reported that he could hear Johan snoring peacefully over race radio.
Posted by bowtie bob at 4.4.11 No comments:

Labels: Johan calls it a snoozer

True to their name, Vitesse the team will speed across the local countryside for a Sunday club ride. This gruelling ride will be the final tune up before their appearance at Paris-Roubaix next Sunday, April 11. h2o, shown below, has the most experience on the cobbles of northern France. K2ness and Lampo Bianco, the speedsters of the team will be looking to h2o to guide them effortlessly across the hell of the north. 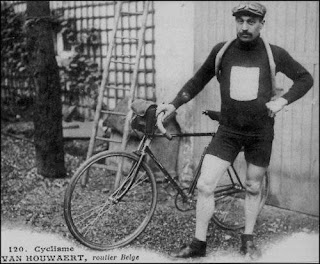 The plan is for Johan to drive the black stealth Escalade to within 1 kilometer of the velodrome so that Team Vitesse can ride in to the cheers and accolades of the ribald fans. This plan has merit.
Posted by bowtie bob at 2.4.11 No comments: