Helmet Design Reaches for the Stars

Barry Hamlin has been hard at work in his role as designer for Happy Lucky 88 Manufactory. Drawing from influences such as space travel and cosmonaut fashion, if you will, Mr. Hamlin has created a new generation of cycling helmets. Distinctive in their minimal crash protection, Barry Hamlin sacrifices safety for style. "We could not ask for anything else" gushed Johan. 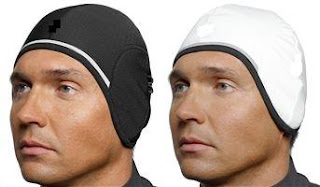 Barry Hamlin himself models his creation which is available in two colorways "slate coal blackitude" and "sour curdle milk".
Posted by bowtie bob at 27.3.12 No comments:

Dear Barry, Please inform Johan that I have begun some form of training, although not according to his lubricated lubriciousness' specific regime. I road for somewhere between 1 and 2 hours (probably 1.5 hours) and I went out thataway, turned somewhere, and came back somehow or other. As you can see the SMEVEC works perfectly. My plan is to hope that I ride again before I have to start over on my training. Barry, tell Johan what you would do, so I can ask Johan what he would do. Kind regards, Lampo Bianco
Posted by bowtie bob at 25.3.12 No comments:

Fans, team sponsors, bicycle afficianados, and other interested parties have been clamoring for information about the enigmatic Barry Hamlin. cycling cosmonaut caught up with Mr. Hamlin, planning strategies and technical improvements with Team Vitesse manager Johan, poolside in San Remo, Italy. Many readers may not be aware that Barry Hamlin designed prototypes for the SMEVEC 88, used exclusively by Team Vitesse in all races. Few changes have been made to the iconic SMEVEC 88 over the 3 years since it was released, and for good reason. "Its sleek lines and user-friendly layout cannot be improved upon", quipped Mr. Hamlin. After much deliberation and exchange of an unknown amount of cash, Barry Hamlin agreed to release a plan for a prototype called the SMEVEC 86. In this cycling cosmonaut exclusive, you the reader can only begin to understand the inner workings of Barry Hamlin's designing mind and follow the natural genesis from concept to cycling fruition. 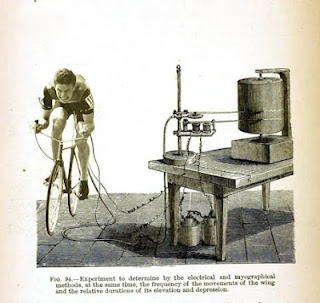 "The cyclist is basically controlled on a glide path and is decumulated via wiring to the main database system. Although bulky, this SMEVEC 86 forward velocity measurement device is surprisingly light weighing just under 13 kilograms", reminisced Mr. Hamlin over martinis. He continued, "Testing results proved positive but HL88 Manufactory requested that plywood be incorporated into the design. I began doodling on a napkin during breaks on the movie set of "Kung Fu Hamlin". 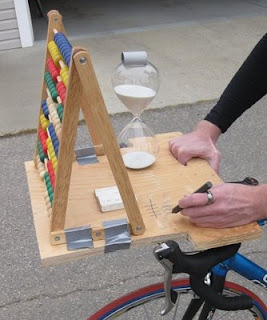 The result was the ever popular SMEVEC 88". As Team Vitesse riders can attest, the SMEVEC 88 is the cat's knees when it comes to biofeedback technology. "Never a day goes by when I wonder what my biofeedback decumulation statistics will reveal about me as a person", mused Dr. K2nees. Lampo Bianco bleated, "I still don't have a clue how to use it but I just freaking love it." h2o claims that "it keeps me slim and trim without the gym."
Posted by bowtie bob at 21.3.12 No comments:

A veritable farrago of questions has arisen since the announcement that Barry Hamlin is designing equipment for HL88 Manufactory. cycling cosmonaut thought it prudent to answer some of the questions sent in by you the readers: Who the hell is Barry Hamlin? Mr. Hamlin is quiet self effacing man of modest means. He is a star of stage and screen and is a tireless fighter for cricket rights, ably defending them from avian attack. He lives with his mother in a small town near the HL88 Manufactory. What has Barry Hamlin designed of importance? Barry Hamlin imagined and then proceeded to construct the barn clearing device shown below. He was also instrumental in the invention of the cutting board. 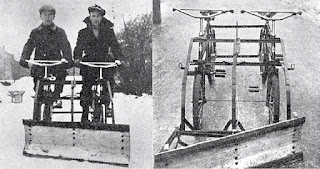 Gearing for the Classics 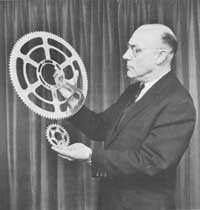 This year, Happy Lucky 88 Manufactory has engaged the design acumen of one Barry Hamlin. Mr. Hamlin looks forward to applying his significant talents to conquering the spring classics. "I like to start out big and decumulate as the glide path becomes more evident. Only through decumulation can Team Vitesse achieve improved derisking", Barry explained sensically.
Posted by bowtie bob at 14.3.12 2 comments:

The last 2 days of Cat 6 riding have been a joy. 2 to 4 cms of snow has fallen each night blanketing the bike path with a duvet of neige. Churning the big gear on the single speed with 32mm tyres, the silence was truly golden. I was able to wheelsuck behind what I believe to be a woman riding a Canadian Tire GRONK bike. She was in deep conversation with Race Radio (seems unlikely since radios are banned in all Cat 6 races)or family or spouse on a mobile phone. I was able to come out of her slipstream for the intermediate sprint. I glanced over and saw no technology indicating that she was talking to anyone but herself. My worst fears confirmed, I continued my sprint well past the line.
Posted by bowtie bob at 7.3.12 1 comment: