Whenever Lampo Bianco ventures further than the end of his driveway on a training ride, he expects the worst and prepares for it. Lampo's motto, "Full speed ahead, my gay lunch kit rules!" has served him well for the past 3 days. cycling cosmonaut could not agree more. 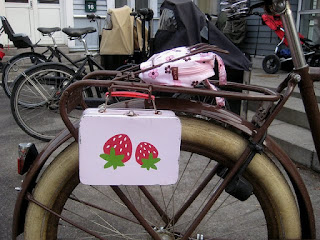 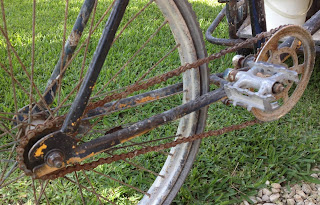 It has become painfully obvious there is a secret long held by Mayans of all colors and creeds. The secret to their long success in construction and crowd control is manifest in this single image snapped yesterday outside the Team Vitesse training complex. In the immortal words of a bandito in the movie Treasure of the Sierra Madre, "We don't use no stinkin' chain oil!". 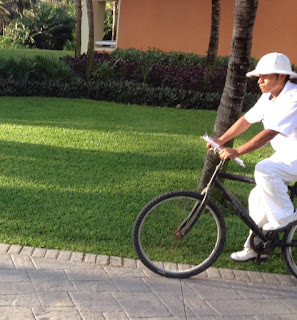 Team Vitesse has been put through its paces by Johan's surrogate manager, HoseB. Neither Johan or HoseA were available. A strong rider himself, HoseB obviously has the latest in kit, helmet and technical equipment. h2o was tested early but has perfected the Heavy Drop in the weightless underwater environment while swimming with the fishes.

For the Aggressive Rider 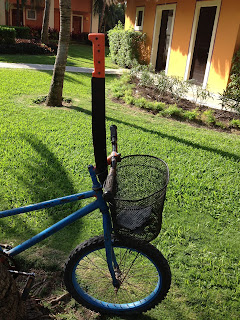 Johan is mightily impressed with this Mexican version of a road bike. It is able to cut through the peloton and leave the competition in ribbons. The special rusted edge will keep the opposition off their bikes in hospital  Whether your riding takes through jungle or the pro peloton, you are sure to leave a lasting impression with this unit.

Sponsorship has its Privileges 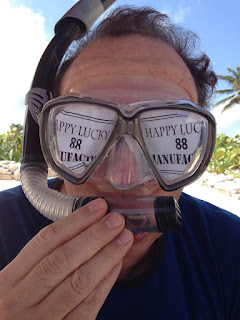 Cycling cosmonaut is currently on assignment in the Carribean checking possible team building possibilities. h2o hasn't seen much of the resort so far spending most of his time representing HL88 wherever he goes. 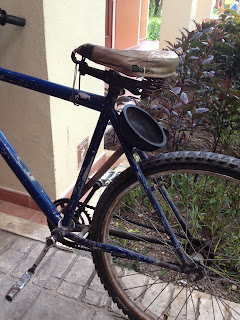 Johan loves the practical use and mix of sewage control and cycling prowess found at the Team Vitesse training camp.

Future ramifications of the Past

In this week of doping scandals and the handing out of retroactive sanctions, it has come to the attention of Team Vitesse and sponsor Happy Lucky 88 that the UCI and CAS have PREEMPTIVELY sanctioned Team Vitesse rider, Dr. K2nees. With the recent rash of back dated suspensions (Contador gets 2 years but can ride in August, Ullrich getting 2 years but he has been retired for 5 years making him eligible to ride for the last 3 years) it is poetic justice that Dr. K2nees should be preemptively sanctioned. After all if he was victorious at the Tour de Dump and received the points associated with those wins, the ruling bodies must assume that doping took place. With today's announcement of the preemptive past tense sanctioning, Cycling Cosmonaut has learned that the good doctor will be eligible to ride as of last week. Through out the protracted process, Dr. K2nees has long claimed his future innocence. He does agree that it is a good idea to enjoy a "$3M Spanish steak purchased in Alberto" because they did do wonders for his past training regime. Johan was reached for comment at the Dubai camel track where he currently has all of Dr. K2nees' future prize money wagered on "Alice, the Dromedary of Death (ADD)". Johan brayed, "It doesn't surprise me one bit. K2 is a shifty guy who has never grasped his own Within Power. If he had, presently he won't be in this past predicament in the future. The team stands behind any future decision he may make and have retroactively terminated and reinstated him. I hope this unfortunate incident will not affect our future and past invitations to the prestigious Tour de Dump event". Happy Lucky 88 Manufactory officials were also reached for comment murmuring, "We think that plywood should be enough of a performance enhancer. Why do professionals seek solace in best before beef gone bad?". Sadly, due to an impending UCI and CAS deadline long past, HL88's nebulous comments are just that.
Posted by bowtie bob at 10.2.12 No comments:

A credible interweb news source is reporting that a Professor will starve himself to clear Alberto Contador (AC) of doping charges. Next we will read that a Professor has died waiting for Contador to be cleared. Cycling cosmonaut wishes to assure readers that this professor is NOT our beloved Dr. K2 who has reportedly eaten a hearty breakfast of cream of wheat laced with gobs of tranquillo. Tranquillo is the active ingredient much sought after by Spanish and Italian riders. AC found it in beef steak but got caught. Ivan Basso found tranquillo in Spanish blood bags and served a suspension for his troubles. This all seems a bit excessive. Dr. K2 gets his daily requirements of tranquillo from breakfast cereal made with loving kindness by Mrs. Dr. K2. What more does a fellow want?
Posted by bowtie bob at 8.2.12 No comments: