A new year always bristles with excitement and anticipation with pro cycling team presentations, new team kits and the desire to improve on the previous year's results. Team Vitesse is no exception although improving performance over 2011 will be next to impossible. However, Johan is never one to shy away from a challenge. He demands that Team Vitesse utterly dominate the sport in 2012 by doing "whatever it takes". Johan spent his short prison hiatus designing an incomparable training program that can be utilized by professionals as well as amateurs. Obviously the amateur program costs a lot more but promises to be equally effective.
Training programs come and go. Johan has adopted the wildly successful "Elmer" program. Elmer Collins, shown below in 1909, was the champion of motor paced races. Elmer's smug swagger is not an affectation. It is the result of eating right, balancing the correct "dietary supplements" and being lucky in UCI doping controls. 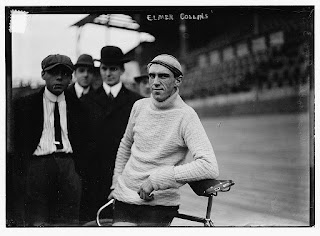 Johan's training brainchild is called "Converging Static Flux Moments" or ConStaFluM for short. "If Team Vitesse can converge their static flux moments at the optimal launch coordinates, they will represent Happy Lucky 88 Manufactory with pride", mused Johan over hi-balls. Whatever happens, Converging Static Flux Moments promises to be THE story to watch this coming race season.
Posted by bowtie bob at 6.1.12