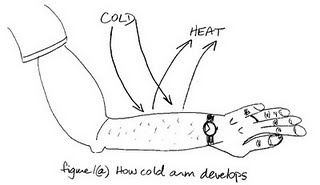 It has come to the attention of this writer and the management of Happy Lucky 88 Manufactory that there is a great vacuum in the hoi polloi's knowledge and appreciation of the dangers of Cold Arm. Cold Arm strikes without warning and is indiscriminate in choosing its victims. Whether hirsute or non, old or young, lean or fat, lame or halt, Cold Arm can reduce its victim to melancholia and alienation.
Recently this author was watching televised news when suddenly the first symptom of Cold Arm presented itself. I noticed a chill which escalated to Cold Arm in mere moments. Once Cold Arm arrives there it is impossible to reverse the trend. I attempted to cover myself with a sleeping bag so that only my head was exposed. This proved difficult due to the limited use of my Cold arms. It was then that I realized that I was indeed in serious trouble. I was unable to operate the remote control and had to rely on PE5GW to make the choices and mute the advertising. Added to this loss of control and power was the unsympathetic scorn and ridicule that I was subjected to. Cold Arm sufferers are vulnerable to what can only be described as the callousness of an ignorant public.
I believe that more must be done to raise awareness of Cold Arm. That is why an educational initiative will be launched with the proceeds of the wildly popular CAFIB and its spin off, the AnkleCAFIB.
Perhaps you know someone who suffers from Cold Arm or perhaps you yourself has been debilitated by it. Speak out about Cold Arm and show compassion for those Cold Arm sufferers you know personally.
Posted by bowtie bob at 27.4.10

Oh dear lord, NO. Not cold arm. Should I get the shotgun and do the humane thing? It's like becoming a zombie; the infection consumes its host forever altering it. We may have to take him out with a 21 bike pump beating.