The SMEVEC 88T has finally arrived in North America. The long awaited PROFESSIONAL model of biofeedback information technology emanates from the innovators of such exciting products as the "Panel of Sponsor" and "Prosperous Contented Obstruction Blocking". Actually used by Team Vitesse under race conditions in a professional peleton, SMEVEC 88T's functionality, sleek Hyper-aerodynamic Input Performance* (HIP) and high volume deliverable interface have solidified the reputation of Happy Lucky 88 Manufactory in the industry. 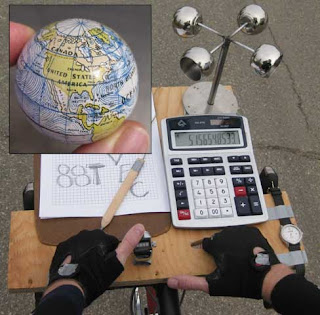 Insert foto shows the optional Globe Positioning System upgrade. The GPS can be easily attached to the flight deck platform using Happy Lucky 88's trademark adhesive. The Formulaic Option Computation (FOC) were previously posted on this site. The FOC posting demonstrates only a small portion of possible possibilities from the interface between rider and SMEVEC. 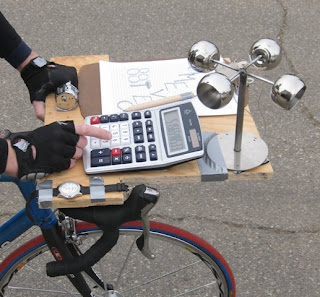 Every SMEVEC 88T comes complete with the diverting "Elated Guide to Sublime Interface" command sheet. Happy Lucky 88's team of engineer won the prestigious 2008 "Golden Mind of Contentment" award for his clipped and turgid writing style in this engaging document.
Now you can solve for unknown unknowns or measure and enjoy thermodynamic transfer rates, gas volumetrics, complex chemical compound weights -- all while riding your bicycle with the Sublime Motion Elated Velocity Enlightenment Computation!
Now there is nothing stopping you from leaving the peleton behind with the SMEVEC 88T!
Posted by bowtie bob at 1.12.08

I am pleased to see the public release of the SMEVEC 88T. In the past months while using a prototype model as part of the Team Vitesse / Happy Lucky 88 collaborative effort (think Cervelo and CSC), I am happy to report that it delivers on all levels. Gone are the ever present concerns; "did i turn on my cyclocomputer before the ride", "what if i have to wait for a train on the way in to Roubaix and time/speed don't account for the stoppage...i really should duck under these barriers....Tom's going, that does it.....i wonder what's for dinner?" The 88T answers all those questions and more. I would like to comment on the optional global positioning system (brought to you by national geographic so you know its up to date with breakaway Russian republics.....more on potential despotic sponsors latter). The ease of use is amazing, i can truly "let my fingers do the walking"....ummm cycling. I have yet to get lost but do suggest the city-by-city detailed fold out map for daily commuters. I hope that all consumers of this amazing promise will be as "sublimely contented" as I am. Hats off to Happy Lucky 88 and Team Vitesse for the development of another quality cycling product.