When Happy Lucky 88 Manufactory came up with their incisive new product, Nipple Shield LXXXVIII, the 88 page instruction pamphlet that accompanied the shields became an instant best seller. Unfortunately, even the most explicit Chinese instructions can be misinterpreted as shown in the foto below. Lampo Bianco is the first the acknowledge that his grasp of Mandarin is not as good as that of Cantonese. He claims that he followed the diagrams, used a protractor and the advice of the HL88 telephonic support system to locate his nipples and install the shields. 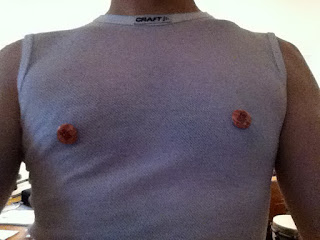 At first blush, it appears that LB has placed the nipple shields in the correct position. However, he claims that the protection is not as effective as it could be. Officials at HL 88 are reviewing the data but refuse to announce a full recall of the Nipple Shield ZX at this point in time. This may be an isolated case of piss poor nipple location techniques rather than a fault with the actual product.
Posted by bowtie bob at 10.10.11

Labels: Cover your nipples and lock up your silverware