With the previous evening's marshmallow festivities a distant memory, we started the day in sunshine and lollipops.  Rolling out about 1030 hrs, we prepared ourselves for an 80 kms day over the Cardinal Divide. 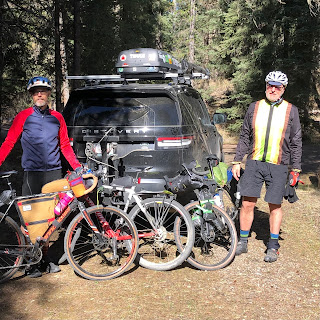 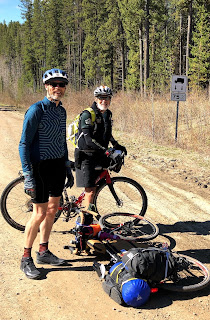 Mark and Gary at the start of the road to Smallboy Camp, an Alexis First Nation community who claim the Cardinal River valley as a natural area 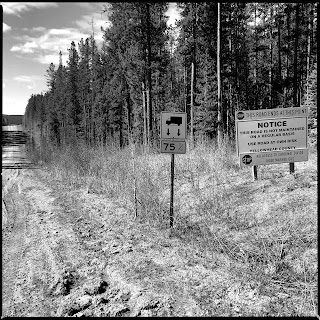 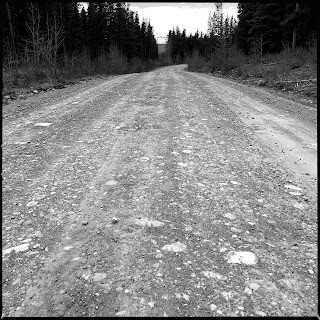 Kinder kopjes (Dutch for baby head referring to the rock distribution)
Gary turned around after 25 kms to head back to his vehicle for the drive to the next campsite. He would eventually ride to from there to head us off at the pass.  Mark and I continued over rolling foothills with the snow pack on the distant mountains always ahead of us. 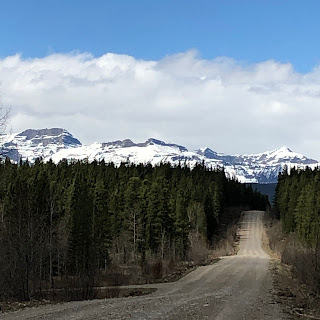 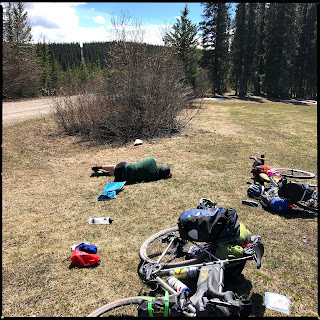 Accident scene reenactment / post lunch nap time on a pleasant grassy area.
We picked our way along the ever deteriorating road headed NW, as it slowly becoming a horse and ATV trail.  It was hard work.  The surface was made up of rocks of various sizes that proved to be quite jarring to the hands and shoulders.  We started to see hoof marks along the edges of the road; the first indications of the wild horse population we had heard of.  The ride was smoother when following the horses' route. Of course they are smarter than us and would find the easiest way to travel. 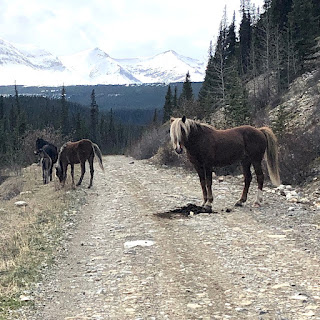 Mustang with his family unit
Mark and I were in awe of the many large piles of horse shit on the road.  We could not make sense of their size.  The largest was 3 feet in diameter and 1.5 feet high.  Much heated discussion resulted in a couple of theories.  These feral horses could be eating an incredibly effective laxative OR they are 3 to 4 times larger than a normal horse. Initial contact with the family unit provoked the mustang to muster a short charge towards us.  I stopped to allow the horses to clear the road. Before he moved off the mustang voided himself on an existing pile.  Suddenly the pile size conundrum was resolved.  The horses mark their territory by crapping on any handy pile of shit.  This fact has been confirmed by Jeremy, Cosmonaut at the Forest Heights Cosmodrome whose experience with horses, both wild and tame, is legendary.
The slow and steady climb to the pass over Cardinal Divide ended when we met snow and the 3 km 12% incline. 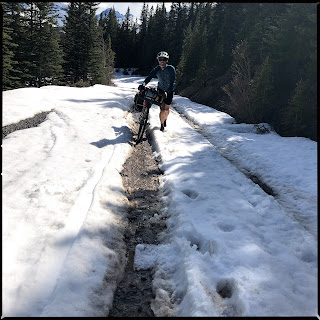 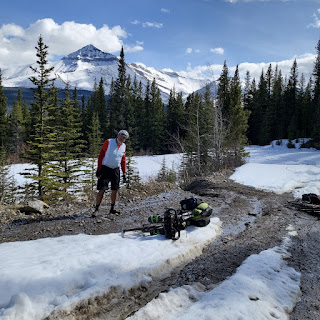 We were lucky to follow an ATV track which had broken the trail before us
The snow became deeper as we neared the top. I expected some snow but not the waist deep drifts we encountered. The view at the top was glorious. 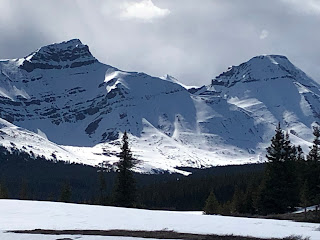 plenty of snow at higher elevations 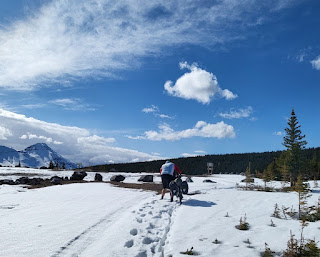 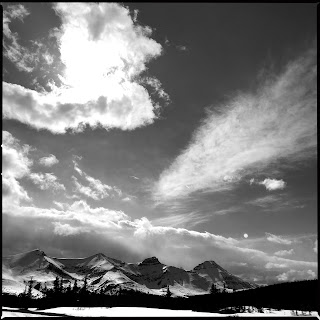 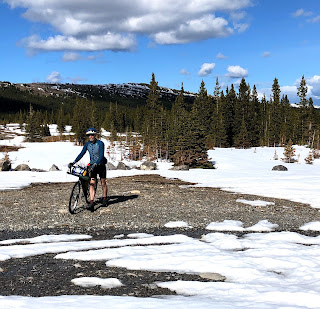 Mark picks his way across the top of the pass
Snow continued to obstruct the road heading down from the pass and we continued to hike-a-bike for 0.5 kms. We met Gary as he climbed up to meet us. He had ridden 14 kms from our camp at Wildhorse Creek.  The industrialization of the Cadomin valley was evident almost immediately after crossing the divide.  Coal mining had completely changed the once treed valley.  Large sweeping smooth hills of displaced rock lined both sides of the road. 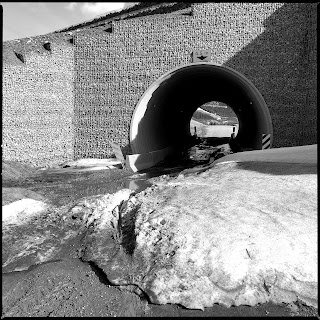 tunnel under the mining activity 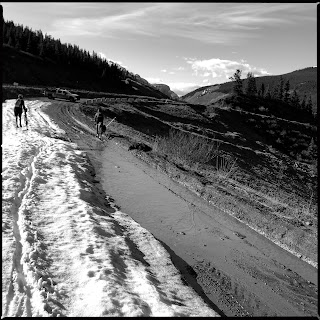 close to camp with wet feet and the warmth of success 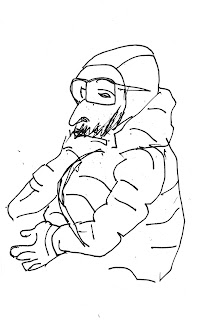 fireside Mark
With an arduous day 2 behind us, I made the decision to drive the vehicle back to Hinton. Gary and Mark would ride the last 60 kms mostly paved section sans baggage.
Posted by bowtie bob at 24.6.22