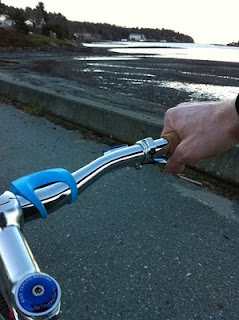 Took a 20 km flier on the ss (ed.: single speed) yesterday Uphill with a head wind both ways! Seriously, there are loooooong hills around here for a guy who hasn't ridden in so long. The ss gearing is now in question. However, Johan has talked me out of changing anything on the launch vehicle until my legs cease quivering.

Maybe I should just ride more which is what Johan would do. The photo was taken at the private WORC bathing facility down from the cosmodrome. The ocean laboratory lies at the base of the unbelievable grind of an 8 km climb on the inland route to the HL88 psychological test lab. The route back was along the water, more downhill included and a fabulous sunset over the mainland mountains across the strait. No photos were taken since that road suggested imminent death by crazy motorists around blind corners.

Cycling Cosmonaut praises Lampo for his bravery in cycling on a dry day in above zero temperatures and thanks him for the reminder that the Other Cosmodrome is locked in winter's icy grip at minus 28 degrees Celsius.