Throwing down the gauntlet

Yesterday, Johan threw down a gauntlet and demanded that Team Vitesse riders get off the couch and train since the Giro starts on Saturday. Immediately excuses began to fly. Dr. K2 pleaded that he had to learn his children's names again and could not go. Lampo Bianco assured Johan that he has been training regularly but there is no way to confirm that. h2o suited up after his green eggs and ham dinner, pumped up the tyres and grabbed some gloves because it seemed cold and threatening. Realizing that the climatic conditions compromised his hand warmth, h2o attempted to put on his gloves. The 2 right handed black neoprene gloves did the trick and kept his hands warm. Unfortunately he could not bend his left hand against the neoprene form fit. h2o claims that the glove discomfort reduced his average speed by at least 5 kmph. 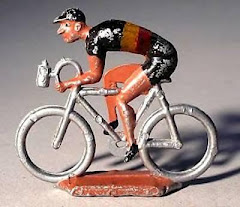