Under sunny skies, 2/3 of the core Team Vitesse riders set off on a training ride in honour of de Ronde van Vlaanderen held April 1. Dr. K2nees, suffering from severe lung loogies, and a resurgent h2o, suffering from nothing whatsoever, set off on a 225 kilometer jaunt. The staging area was abuzz with other teams who were in awe of the new Vitesse team car piloted by h2o himself. The team had selected Moots bicycles as the training mode because of their lightness and torsional stiffness. Of course on race days, they would bring heavier old fashioned bicycle technology to bear -- to confound the critics and cause a rumpus within the peleton. Dr K2 continuously complained of phlegm, chills, and headaches during the quick 50km warmup. These complaints were largely dismissed by h2o as an evil ploy to gain sympathy and mercy. Instead he pushed the pace constantly. "This is what Johan would want me to do" cried h2o into the deaf bleeding ear of Dr. K2. Having completed the mandatory 225 kilometer route replete with hill repeats and sprint practice, it was time to bundle Dr. K2 back into the team car. Asked if he might have been a bit harsh with the good Doctor, h2o parried with, "His legs had good sensations but his lung capacity was 15%. Team Vitesse rules required me to work those rides at 110%. We are all afraid of the wrath of Johan. It makes us better riders if no mercy is shown". Dr. K2 was unavailable for comment having sunk into a coma in HL88's Euphoric Fountain of Youth Booth. 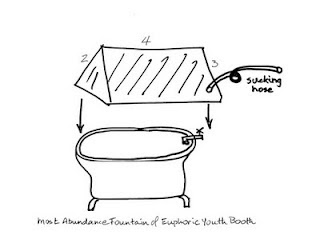