According to a paper by the Swiss economists Bruno Frey and Alois Stutzer, a person with a one-hour car commute must earn 40 % more money to have a sense of well-being equal to someone who walks (or rides their bike) to work. Fey and Stutzer say that people underestimate the down side of a long commute when choosing a home, and that psychologically, a long commute often negates the benefits gained by living in the suburbs.
“People spend a lot of time commuting and often find it a burden. According to economics, the burden of commuting is chosen when compensated either on the labour or on the housing market so that individuals’ utility is equalized. However, in a direct test of this strong notion of equilibrium, we find that people with longer commuting time report systematically lower subjective well-being. Additional empirical analyses do not find institutional explanations of the empirical results that commuters systematically incur losses. We discuss several possibilities of an extended model of human behavior able to explain this “commuting paradox”.
Happy Lucky 88 Manufactory has long held the position that wearing a CAFIB while commuting immediately increases the sense of well being for all racers in the Cat 6. 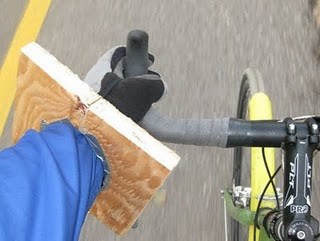 As a fan of this fine blog I wonder this. Is the CAFIB compatible with the "other" wrist decoration? You know, the yellow one that has"Lovestring" on it....