In what is being described as a "Feast for the Ages", a couple of the loyal support staff from Team Vitesse sponsored an dinner of appreciation for h2o. Team cook Rip & Hammer and IT specialist, the "it man" were on hand to applaud the beneficent work of Happy Lucky 88 Manufactory and the continued sinning ways of Team Vitesse. Special Spanish protein discs were flown in from a local butcher for the festive event. These were cooked with loving care by George Foreman on his million dollar grill. Most of the clenbuterol was teased out with the cups of fat that were also liberated during the heating process. 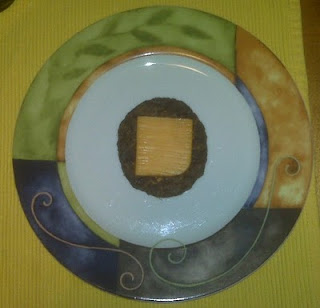 As you can see, the result was a minimalist presentation fit for a King of the Mountains. h2o was the lucky rider to consume 3 of these Iberian treats. The raucous party broke out into song as the cranberry/spa drinks began to take hold. Toasts sent glasses clinking as Happy Lucky 88 Manufactory was hailed as the great innovator of modern day plywood usage. Johan provided some short disjointed comments via a satellite link up from a ditch outside of Bern. Transcripts of his colourful nonsensical rant are still being deciphered. All in all a most excellent evening was enjoyed by all.
Posted by bowtie bob at 4.11.10